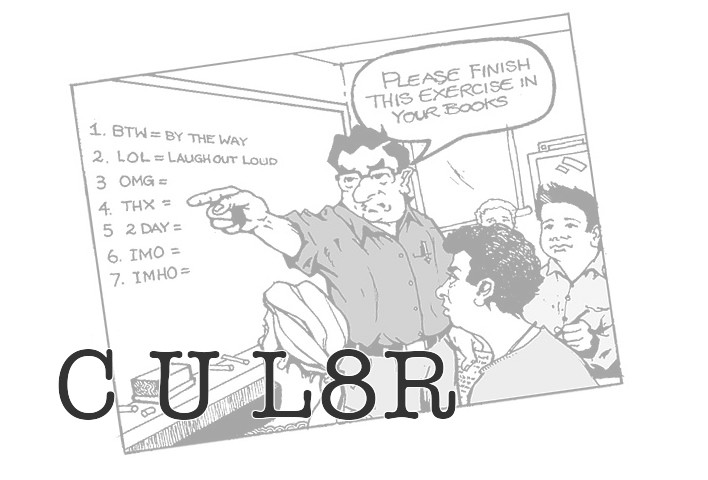 When I was growing up my generation were at the cusp of SMS messaging (texting). My first mobile phone allowed me to send 10 messages a day, they were all free and that was it, you couldn’t even pay for more if you wanted you just got 10. What you sent in those 10 messages of 140 characters was crucial, when they were gone they were gone! Contracts were too expensive so we all had pay as you go phones with basically only enough credit to make that emergency call.

Born was the txt speak. GR8 (Great), M8 (Mate), K (Ok) and L8R (Later) are just a few examples of the way we had to communicate in order to get the point across in such a short message. So txt speak existed out of necessity because of the limit that was implied to us, sometimes I could rewrite a message about 5 times to make it fit, I hated someone replying with simply “OK” arghh what a waste of a txt!

However in our new technology enhanced world there are almost no limits to the amount of text that you can write in a message. So the requirement for txt speak as we knew it is now effectively extinct, where the old style does exists its either older generations ‘trying to be cool’ or laziness. We also now have the ability to send photos, voice and video messages using services like Snapchat, Facebook etc. Our written messages are also gaining emotion, you will rarely receive a message which doesn’t contain an emoji. I really like the use of emoji as often written language in a text message could be read and interpreted in many different ways and emoji can add a new dimension and feeling to the message.

Some txt speak is still in use and has actually made it too far into the real world e.g. LOL (Laugh Out Loud not Lots Of Love like in the old days). You will now actually here people saying LOL instead of actually laughing!

Modern txt speak are actually now full words but words that don’t even exist in the english language for example; ‘bae’ (which has taken me 4 attempts to type as Chrome kept autocorrecting it to ‘be’. ‘Bae’ is used as a romantic term of endearment. Also ‘fleek’ which means looking good.

A bug bear of mine is ‘FOMO’ meaning Fear Of Missing Out (old school txt speak) where we have a generation where ‘Bragging Rights’ exist and that life is a constant competition to ensure each post into social media will hopefully outdo the last, when will going to the cinema to watch a film or a concert to watch your favourite band be good enough, if you can’t just enjoy it while you are there in the moment and tell your friends after will we develop an issue in being able to properly communicate our feelings and emotion?

I am guilty of using my devices too much, but I do remember a life without it and I feel I do know when to stop.

So where is this heading? Will we have a generation turning up for interviews using words that we do not understand? Will these words be written in exams? Will teachers marking the exams understand them? Should they?