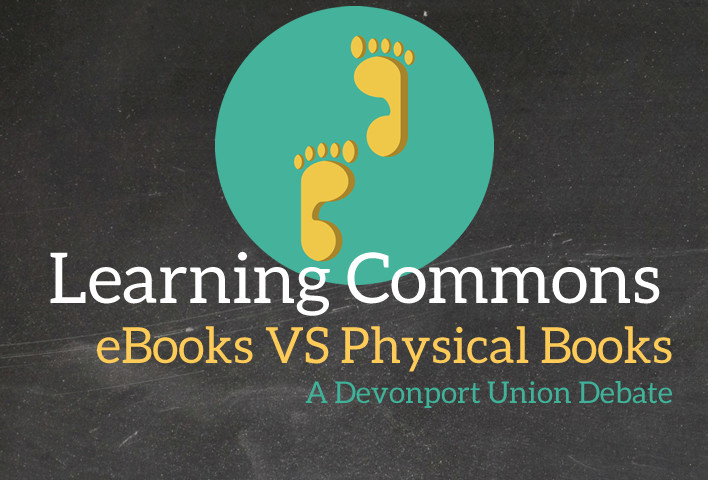 On Thursday the 15th of January 2015 as part of the Learning Commons promotion week the Devonport Union hosted a debate the motion being “This house would have the school emphasise eBooks and online resources over traditional resources.”

The debate had a great turnout and a good range of year groups in attendance. The first point to be raised was about the emotional attachment that is felt from holding and retaining a physical book. Some felt that they could get more from a physical book because it felt more personal, you can fold the pages, mark the pages and make notes on it. Equally many students prefer the way that you can highlight, immediately look up word definitions and search the book for key words.

It was then raised that some research has been done on the media from which we read from which suggests students retain more information when reading from physical books to eBooks. I have looked up this research and it is an interesting study (Read more here). It concludes “This doesn’t mean that there isn’t a place for e-text books or computerised courseware, however. Neither Nielsen nor Garland is opposed to using new media for teaching. In fact, both believe that there are many situations in which they can offer real advantages. However, different media have different strengths — and it may be that physical books are best when you want to study complex ideas and concepts that you wish to integrate deeply into your memory.” I am sure a lot more research will be done in this area and hopefully some people will do some research to try and find more of the positives that come from eBooks and study different ranges of students.

Several students felt that it may be a generation thing. Younger generations feel more comfortable using digital resources because it is what they are used to using vs older generations are used to paper therefore that is maybe why information might not be retained as well.

Discussions then went on to the topic of costs many students believe eBooks offer great financial benefits with services such as Amazon Kindle offering thousands of eBooks for free. This was counter argued by Local Authority libraries also being free but with government budget restraints many libraries are now closing and the point was raised as to whether the government could provide an eBook service.

There was also a good staff turnout at the debate and from a member of staff some great points were raised in favour of eBooks. Firstly saying you can annotate on a eBook but you cannot on a school textbook. Also eBooks can be updated easily without the need to throw away and buy new books which has high costs and high impacts on the environment. There are also other benefits that eBooks can offer to people with disabilities such as the book being read out or text being enlarged for visually impaired students.

The general consensus was that eReaders such as the Kindle (not Kindle Fire) was a good replacement but devices such as iPads did not make good eReader devices due to backlit screens causing eye strains, too many distractions and poor battery life (a physical book never runs out of battery).

The debate concluded with 14 to 15 in favour of eBooks vs Physical books. So where next…